Another short summary of Damasio's argument on consciousness and self

What follows is a draft that I wanted to integrate into an essay about 'I'.  I was not able to do so, and wrote a short essay instead (please see the following post if you're interested).  Yet, the draft is, hopefully, readable as a short essay that explains Damasio's theory of consciousness and self with addition of some elements of Luhmann's systems theory.  Please go on to read if you're interested.  I put the figure below to give you an intuitive overview of Damasio's argument. 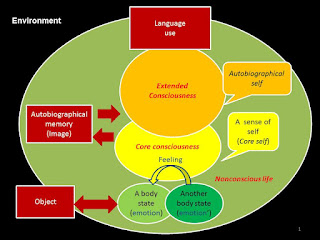 1 Nonconscious life and its emotion

This concept of the detection of objects, incidentally, corresponds with the definition of  information by Bateson: 'a difference which makes a difference.'  Finding objects (information) is important for a life system for its survival.  Information detection should be selectively improved (i.e., to detect all but only information that is critical for the survival).

To increase the chance of survival further, it is advantageous for a life system to be 'aware' of the detection, and still more, to keep the record of the awareness internally for potential future use.  This is why, I assume, some life systems evolved to have consciousness and memory.

2 CORE CONSCIOUSNESS AND CORE SELF

Life systems that have been evolved beyond the level of detecting information (i.e., its objects in its environment) to be aware of (or to know) the detection so that it can better be used in future are those that have consciousness, or to be more exact, 'core consciousness' in the terminology of Damasio.

The core self equipped with conscious knowledge of the detection and reaction now maintains this second-order neural representation for its better chance of survival in future.  This is memory, and as this memory is built through its own experience, this memory is called by Damasio 'autobiographical memory'.

Autobiographical memory is maintained presumably even by some non-linguistic animals like dogs, because dogs remember their experience and learn to react differently from the past.  However, an animal that uses signs can encode (to a varying degree) its autobiographical memory into the signs and use them for itself, and perhaps more importantly, exploits the signs made by other animals for its own advantage.  Autobiographical memory, at least some part of it, is now extended beyond one animal to its community by the use of signs.  The typical animal that uses signs is of course humans.  In the next section, I'll explain the new type of consciousness and self ('extended consciousness' and 'autobiographical self') that humans have acquired mostly but not exclusively by the use of language. (Although there are other signs than language, I'll focus on language in the next section because it is the typical and most powerful sign).

3 EXTENDED CONSCIOUSNESS AND AUTOBIOGRAPHICAL SELF

Language expands our horizons.  With the use of language, we  more explicitly recall the past (of ours and others'), imagine alternative realities of the current situation, and rehearse possible scenarios for the future.  Our consciousness is now beyond 'here and now' of core consciousness and extended into possible realities.  Damasio calls this type of consciousness 'extended consciousness'. 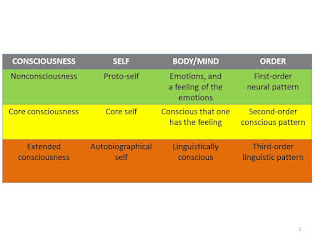 One thing I'm emphasizing in this essay is that it is mostly through the use of language that our consciousness is fully extended and our sense of self is thoroughly autobiographical.  If we only use non-linguistic signs that do not contain syntax and metaphors, our recall, imagination, and scenarios must be incomparably limited.

However, another thing we should pay attention to is that language has its roots in the body of its user.  Language is ultimately based on the detection of objects in the environment as information (i.e., something that is critical for its life) and the detection and core consciousness of it are made possible by the different body states that the life system feels and knows.  In short, without the body, there's no language use.  I'll explain more in the next section.

[I gave up writing here.]

A summary of Damasio’s “Self Comes to Mind”

Email ThisBlogThis!Share to TwitterShare to FacebookShare to Pinterest
Label Consciousness